On November 20, 2019, the Associated Press published an article by Mike Melia regarding efforts to diversify America’s teaching ranks

WATERBURY, Conn. (AP) — It wasn’t until she became a high school senior that Kayla Ireland had another black person as a teacher in Waterbury, a former manufacturing hub where the students are mostly minorities and the educators are generally white.

The imbalance never troubled her much, except for some moments, like when a white teacher led a discussion of police brutality and racial profiling. But the absence of black teachers has been a frequent topic of discussion among Kayla’s classmates at Wilby High School, which has struggled with high numbers of disciplinary issues, including a mass suspension over dress-code violations.

“Sometimes people go through bad days. But because you don’t have that person that looks like you, a person that you can talk to that can relate to it, you don’t really know how to explain it,” said Kayla, 16. “So it feels good to have a teacher that you can go to, and you feel comfortable with, because you’re not going to be deemed the girl in class who doesn’t know anything.”

More than half of the students in American public schools are minorities, but the teaching force is still 80% white, according to statistics from the U.S. Education Department. As mounting research highlights the benefits minority teachers can bestow on students, the gap has received renewed attention, including from Democratic presidential candidates who have endorsed strategies to promote teacher diversity. 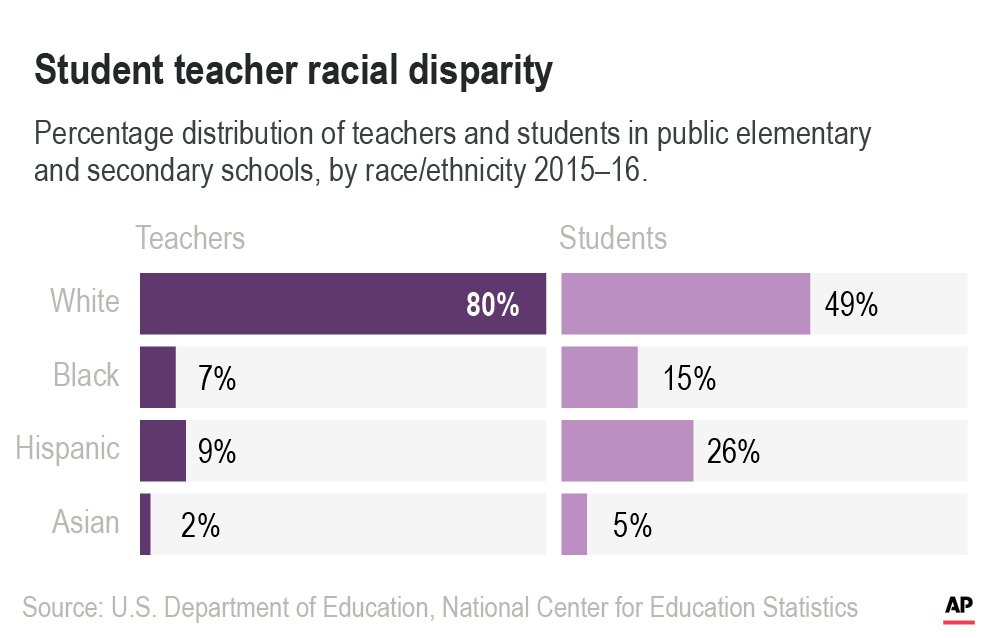 Sen. Kamala Harris, who spoke at a September debate about the importance of black teachers for black students, has proposed spending $2.5 billion for teacher-preparation programs at historically black colleges and universities. Other leading Democrats have also called for investment in those schools, as well as mentorship programs, assistance for teacher aides and new requirements to promote transparency around teacher hiring.

The Waterbury school system has taken steps to close the racial gap following complaints from the NAACP. Its limited success so far highlights some of the challenges of addressing the problem, which some see as rooted in teacher training programs and barriers that date back to the 1954 Brown v. Board of Education ruling that led to desegregation.

An agreement reached by a state human rights commission and Waterbury’s mayor in 2017 committed the city to build a partnership with black colleges and universities for recruiting purposes, to train students interested in teaching beginning as early as middle school and to provide cultural competency training to current educators. The 2016 national teacher of the year, Waterbury’s Jahana Hayes, was hired as the top recruiter before becoming the first black woman from Connecticut elected to Congress in 2018.

Known as the Brass City for its historical brass production, Waterbury has 19,000 students in its school district. The number of black and Hispanic educators has been rising, but the teaching force was still 86% white as of the last school year. Among new hires, the percentage of minority teachers jumped above 30% for two years before falling back to around 25% last year. 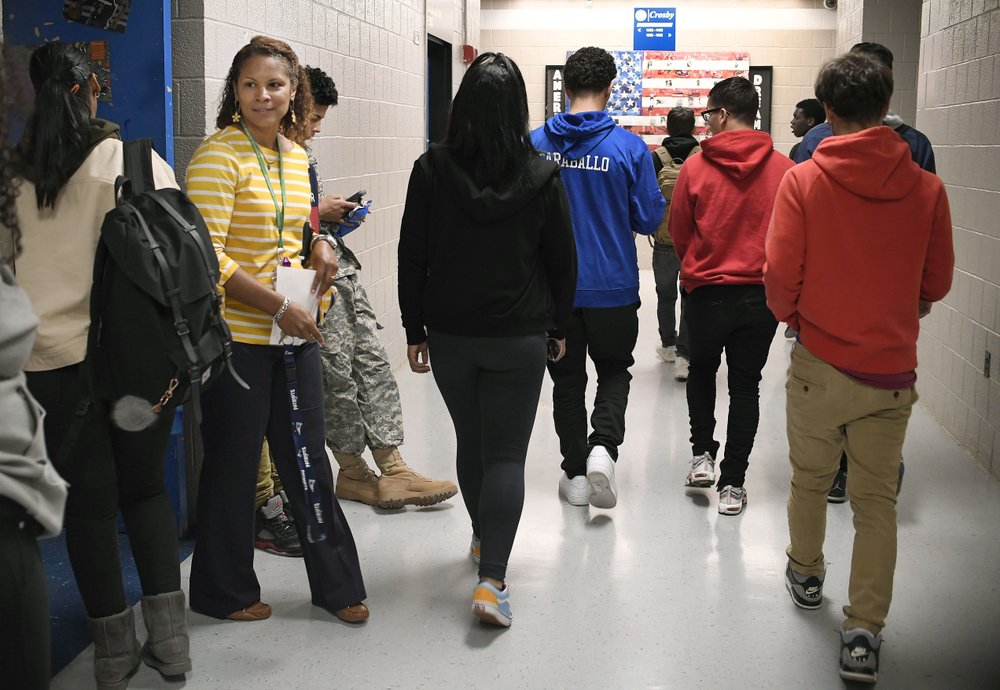 Despite the district’s outreach efforts, teachers and administrators often pass up or leave jobs in Waterbury for nearby districts offering higher salaries.

“We’re one of 169 towns in the state. And so there is stiff competition,” said W. Lee Palmer, the district personnel director. “And that’s one of the reasons that we have to be really aggressive about what we do.”

Cicero Booker, a former NAACP Waterbury branch president, said the district is doing the necessary work and change will take time. He also raised questions about the city’s financial commitment.

Kayla remembered the police brutality discussion as an example of when a white teacher struggled to connect with black students. During a sophomore-year English course, the teacher assigned the class to read “The Hate U Give,” a young adult novel about a police shooting. As students talked about how they avoid going into stores with hoodies on, the teacher understood but could not relate, she said. 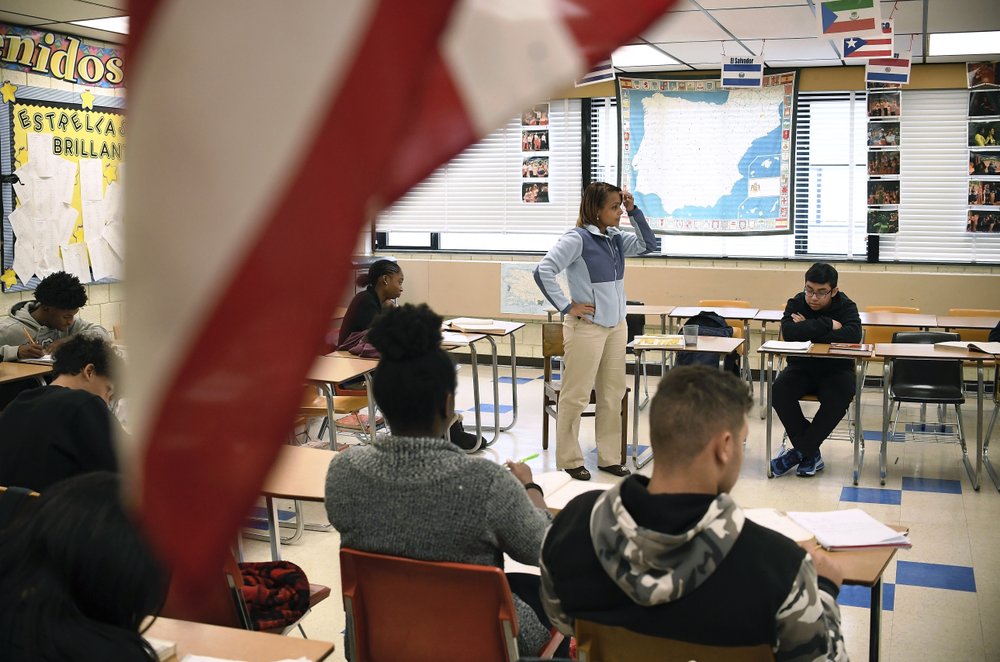 After the mass suspension of over 150 students for dress code violations at Wilby in the spring of 2017, the appointment of a black principal brought optimism that the climate would improve, Kayla said. With more minority educators, she said, there would be less antagonism.

The low numbers of minority educators nationally results partly from disparities in teacher training programs, which have been shown to enroll disproportionately large numbers of white students. Researchers also have traced declines in the numbers of black teachers to the period of desegregation marked by school consolidations and a trend toward tighter accreditation requirements.

The issue has received attention from state leaders in Connecticut, which this year passed a law creating new flexibility in teacher certification requirements and providing mortgage assistance for teachers who graduated from colleges that traditionally serve minority students. But advocates say it will take change at each individual district.

“If there is an opening in your building, unless you say I am intentionally going to fill that opening with a person of color, we will not change,” said Subira Gordon, director of the ConnCAN education advocacy group.

Kayla’s mother, LaToya Ireland, said she will never forget a black teacher she had in seventh grade.

“She took her time not just with me but with other students, and she really left a lasting impression on my life,” she said. “I would like for my girls and other kids to see that.”

More posts from In the News